Bridging Politics and PR: Lessons Learned from a Presidential Visit

Bridging Politics and PR: Lessons Learned from a Presidential Visit

Three of Southwest Florida’s political insiders shared their insights at FPRA’s local chapter luncheon on Tuesday, May 4th at the Broadway Palm in Fort Myers: Sharon Harrington, Tammy Hall and Will Prather. This is the third of three posts reviewing their presentations. 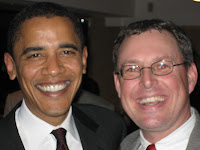 Lee County Democratic Chairman Will Prather is a successful businessman and supporter of the arts in Lee County.  He’s well-versed and comfortable in working with the media through many years of leading community events and business development at the Prather Family of Theatres.

Just as the 2000 election changed the face of how we physically cast our votes, it changed Prather’s outlook on the importance of every vote in such a close race.  Inspired by Howard Dean during the 2004 election, Prather publicly declared his political leanings, became involved in the Democratic party and published daily reports from the Boston convention.  Despite receiving negative feedback and even cancellations from customers in this traditionally Republican area, he continued to stand strong in supporting candidates he believed in, including heading the Southwest Florida campaign for Barack Obama in the 2008 election, and shortly thereafter became Chairman of the Lee County Democratic Party.

He recalled several instances where the original intent or “story” of an event was lost when the media grabbed onto a controversy instead.  During the 2008 election cycle, there were several notable visits to the local area… by Michelle Obama, Joe Biden and Sarah Palin.  However, what garnered the most media coverage was Sheriff Mike Scott’s use of Barack Hussein Obama’s full name during the Sarah Palin rally.  This totally overshadowed the candidates’ visits and messages and dominated the news cycle, even making it to the national news.

Prather’s best (and worst) political experience began with a phone call from the White House Political Affairs Office letting him know that newly-elected President Obama was planning a visit to Fort Myers.  It was a challenging experience working with the White House staffers on this event because of coordination, communication and crowds!  Unbeknownst to Prather, Robert Gibbs unintentionally mentioned the visit to Fort Myers during a press briefing, unleashing a media frenzy several days prior to the planned announcement of the visit.  The low point of the event came with the ticket distribution, when there were only a limited number of tickets available and Prather knew that anyone arriving after 2am to get in line would likely not get a ticket.  As the crowds grew (and grew restless) outside Harborside Convention Center, the White House staffers’ instructions, there were no announcements made.  Prather was basically forbidden from addressing the crowd or the media regarding the ticket situation.  Very frustrated and worried about the crowd getting out of control, he took matters into his own hands and arranged to meet the press behind Harborside to clarify any misconceptions regarding ticket distribution.  Needless to say, the White House staffers were not pleased about Prather going against protocol.  Although he succeeded in disseminating more accurate information to the public and avoiding a riotous situation, he was not rewarded by staffers with what they call the “pull back” — the opportunity afterward to be pulled aside and thanked personally for his efforts by the President.

Continuing the discussion, Prather also mentioned the challenges of working within a party-driven organization with official talking points, rules and even loyalty oaths.  These often present obstacles to effective public relations during political campaigns.  He also stressed awareness of the social media effects of partisan politics, when your views are publicized online and open the gates to criticism — from all sides — regarding who you “friend” and what you say or do.

… Be sure to check out the other two related posts about the presentations given by Tammy Hall and Sharon Harrington on the topic of “Bridging Politics and PR”.