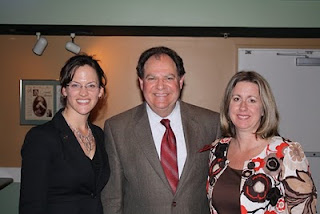 FPRA’s March 8th luncheon theme was “Building Bridges for Mutual Benefit” and who better to speak to that topic than Jack Levine, communications and public policy consultant and founder of 4Generations Institute?

Levine opened his candid discussion of the four generations by posing an introspective question, “Who helped shape you – positively or negatively – how to be or how not to be?”  Specific people in our lives, from previous generations, have been influencers.
At the turn of the last century (1900s), there were typically three generations in families: children, parents and grandparents.  Life expectancy has been increasing dramatically since then.  In 1908, the average life expectancy was 47; during the depression, it was 62; today – almost 80.  This longevity has led to the addition of a fourth generation: the great-grandparents.
Levine provided some additional statistics: of every 75 year old ever alive in the history of the United States, two-thirds are alive today.   Currently, there are 53,000 centenarians in our country.  With the current trend of longer life expectancy, in 30 years, there will be 500,000 centenarians.
Emotional and economic attention is needed for this surge in elder population and meeting their needs. According to Levine, “In order for us to have a future for all our generations, we need to have a plan.”
One of the keys to that plan is intergenerational bridging, rather than segregating the older population.  Seventy-five percent of children under the age of five have two parents working. Teens need positive influencers that help them gain interests.  The older generations can help provide the younger generations with a brighter future by sharing learning and life experiences, passing down skills and interests to the later generations.
In business, these theories can be applied through communications which evoke an emotional connection to inspire a buying decision.  Levine dubs this an emotional intelligence – knowing the motivations for each generation.  Bridging the generations is about mutuality – approaching multi-generational community “with something”, rather than “for something.”
In closing, Levine encouraged us to leave a legacy as we personally work to bridge the generations.  What will you be remembered by?
FPRA SWFL Chapter2010-03-09T07:20:00-05:00March 9th, 2010|