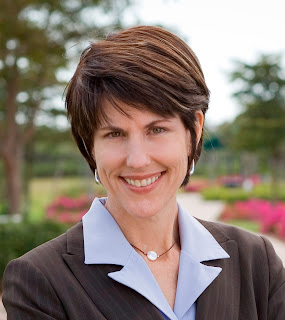 Kitty Green took the helm as President and CEO of Habitat for Humanity of Lee and Hendry Counties in March of 2010.  In this position, she is responsible for leading one of the nation’s largest Habitat affiliates, providing direction for a diverse non-profit homebuilder, mortgage company and resale operation, with the mission of helping hardworking families own their own decent, affordable homes.
Green was formerly the President and CEO of Bonita Bay Group, developer of seven master planned communities in Southwest Florida.  Over her ten-year career at Bonita Bay Group, Green was responsible for the development of Verandah in east Lee County and Sandoval in Cape Coral.  Prior to Bonita Bay Group, Green worked for WCI Communities, holding several positions over her ten-year career there.
Before joining the staff at Habitat, Green served the organization for nearly 16 years as a volunteer, including many years’ service on the organization’s Board of Directors.  Green is currently Chairperson of the Lee County Horizon Council, and a member of the International Women’s Forum.  In 2008, she was featured as one of Gulfshore Life’s Women of the Year, and was named a 2011 Gulfshore Business “Best Boss.”  A Fort Myers native, Green still lives in that city with her husband Charlie and their twin teenage daughters.
Habitat for Humanity of Lee and Hendry Counties is a non-profit organization dedicated to helping low income families achieve homeownership through the use of zero-interest mortgages, volunteer labor and donor contributions. Habitat has turned over the keys to 1,234 families in Lee and Hendry Counties since 1982.

Join us to learn more from Kitty Green at our May chapter luncheon when she discusses how their affiliate implemented a program called Women Build to successfully engage new donors and volunteers in their mission.