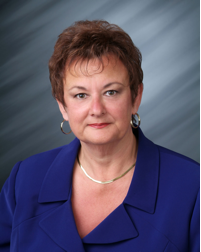 Prior to her employment with the Lee County Supervisor of Elections Office she spent 24 years in management positions for a variety of businesses both in Ohio and Florida.

Sharon began her employment with the Supervisor of Elections on April 3, 1989 as Fiscal Officer/Human Resources Director and worked very closely with Philinda Young, the previous Supervisor.  She has worked in all departments of the Elections Office and was a part of the transition teams that worked on the countywide conversion to the touch screen voting systems in 2002 and the optical scan system in 2008.

She was promoted to Assistant Supervisor-Finance/HR in December of 2002. Sharon was appointed to fulfill the unexpired term of Philinda Young by Governor Jeb Bush on January 20, 2004, and took office on February 16, 2004.  She was elected to the position in November of 2004.

Civic organization participation includes: Southwest Florida Crime Stoppers Board of Directors where she served as chairman for 10 years; Life Member and Kiwanis Lady of Kiwanis International, currently a member of the Kiwanis Club of Fort Myers-South and the Fort Myers Women’s Community Club.

Sharon was elected to Who’s Who Worldwide for Business and Professional Leaders and was awarded the ABWA Woman of the Year award.