Ready for a Golden Safari?

Ready for a Golden Safari?

With a “super” Local Image Awards program under our “bat belts”, it’s time to polish up those entries (or create new ones!) for The 2009 Golden Image Awards Program! “Golden Safari” will have the judges hunting for the best public relations programs in the state. In 2008 our own Susan Bennett, APR, CPRC won the Dick Pope All Florida Golden Image Award – signifying the SWFAS Campaign to Build a New Detoxification Center was the best in the state! 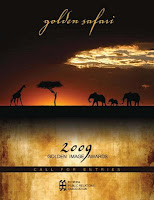 All the details, as well as the Call for Entries can be found here on the Chapter’s Web site. The deadline to take advantage of complimentary shipping sponsored by Gooderham & Associates is May 21, 2009.