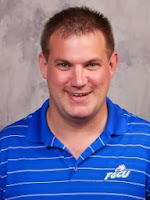 Bruce Banko II enters his 11th season as the Voice of the Eagles, and was named as FGCU’s Media Coordinator in September of 2013.
As media coordinator he is responsible for issuing credentials to members of the working media, press release distribution lists, special media requests, and game day media hospitality. He also oversees all content for FGCUathletics.com.
Banko served as the interim contact for all 15 D-I sports during the summer of 2013 and was a member of FGCU’s initial NCAA D-I Certification Committee. He is also the first and only announcer for FGCU’s volleyball, women’s soccer, women’s swimming and diving, softball, and sand volleyball programs. In addition he also serves as the shot-clock operator for men’s and women’s basketball.
Prior to joining the FGCU staff Banko served as the Sports Information Director and Volunteer Assistant Athletic Director at St. John Neumann High School in Naples, Fla.
He is a member of the College Sports Information Directors of America (CoSIDA) and the National Association of Sports Public Address Announcers (NASPAA).
A native of the Oxford, Conn., Banko currently resides in Fort Myers.
FPRA SWFL Chapter2013-09-26T11:58:00-04:00September 26th, 2013|